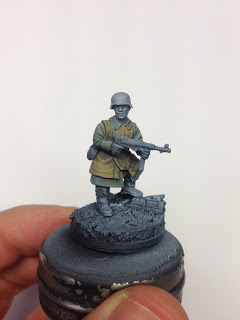 Let’s take a look at painting the splinter camo pattern on this M31 Zeltbahn that Otto is wearing.
I must say upfront that I would not want to paint a whole outfit in a camo pattern. With my way of painting, this would be waaaaay to time consuming and I’m not sure I’d be able to stay motivated.
Anyway, here it goes: Start the splinter camo with a green-brown base (I used Model Color 879). At this stage, I also painted the highlights and shadows. I used an off-white (like Game Color Bonewhite) to mix my highlights and a dark-brown to mix my shadows.
When I was done with that step, it looked something like this: In the second step just paint the camo pattern on. Done! 🙂
Well, I guess it would be nice to have a bit more detail on step 2, but I have to admit that I simply forgot to take further pictures.
For the next camo paintjob, I will have my camera ready and I promise to take enough pics so I can explain the painting process. And I think that many pictures are needed as it becomes chaotic and messy sometimes.
So, what camo pattern would you like to see explained?
Here are the ones that I have already tried out myself besides the splinter camo example above: