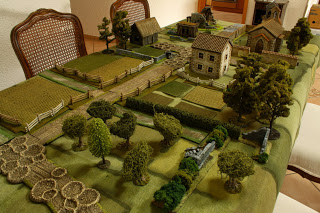 Spent a wonderful Saturday afternoon with friends playing Bolt Action and having a BBQ.
Some impressions from the our small scenario which had ~800 points on each side – Germans vs. Russians. The Germans defended a little village somewhere in Western Russia 1943 and the Russians tried to cut this German resistance pocket off in order to bleed them out.
The game was a terrible loss for the Germans who got almost completely annihilated in about 5 rounds. Not only were they overwhelmed by the amount of Russian troops, but they also suffered from terrible dice rolls while the Russian player pretty much rolled whatever he needed.
Sharing a few impressions:

In case you have missed my posts about the Germans in this game, you can find those here and here.

One Reply to “Spring in Russia – Bolt Action Battlefield Pictures”