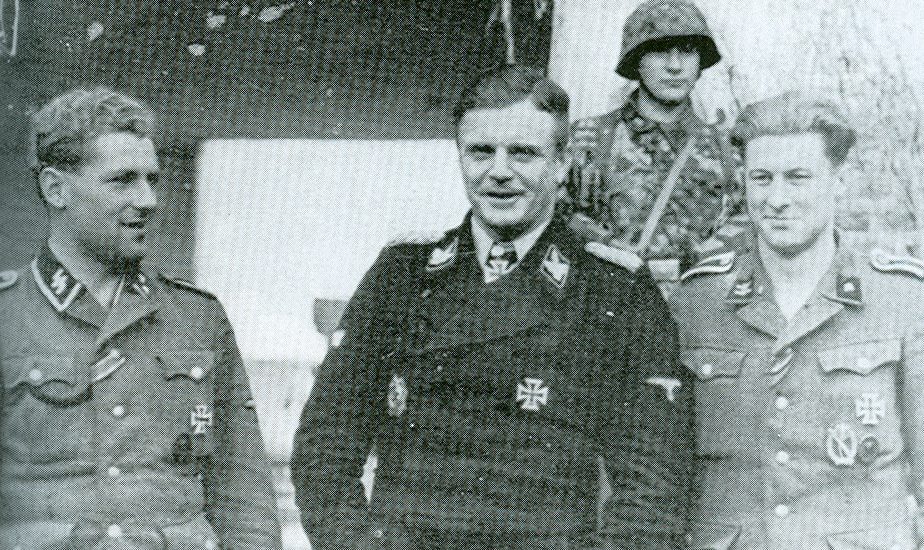 During the summer 1944, the division moved to the Western Front, in Normandy. Harmel had been ordered to break the enemy’s lines, to free the German units encircled in Falaise pocket numbering approximately 125,000 troops of the 7th Army. The operation ended with heavy losses and serious damage. He was then sent to the Netherlands. He fought against the Allied offensive (Operation Market Garden). After the battles around Nijmegen, Harmel received the Knight’s Cross of the Iron Cross with Oak Leaves and Swords on 15 December 1944. His division was then transferred to Alsace, where Harmel was ordered to establish a bridgehead to join the Colmar Pocket. After the failure of the December 1944/January 1945 offensive in Alsace, Harmel’s division was transferred to the Eastern Front, initially fighting in Pomerania and Brandenburg to hold the Oder Front. The division was subsequently transferred to Heeresgruppe Mitte where in late April it was ordered to counterattack the forces of Marshal Ivan Konev. He refused and was dismissed from command by Field Marshal Schoerner. Harmel subsequently commanded an ad hoc battle group formed around the 24th Waffen Mountain Division of the SS, the SS Officer’s School at Graz and other smaller units. He surrendered to the Allied forces in Austria and ended up in British captivity. He died in 2000.

At the age of 37 Heinz Harmel became the youngest man to ever become a Generalmajor and lead a Waffen SS-Division. When Harmel was given command of the 10th SS-Panzardivision “Frundsberg”, he was warmly accepted by the young men in the 10th SS as one of their own. He belonged to them since he had moved up through the ranks and understood therefore how to assess the concerns and needs of his men.
Harmel is remembered for his defensive action during the Battle of Arnheim which resulted in the failure of the British airborne assault as described in the book and movie “A Bridge Too Far”.

Here is our version of Heinz Harmel: Get your own copy of Heinz Harmel in our shop or at one of our resellers!