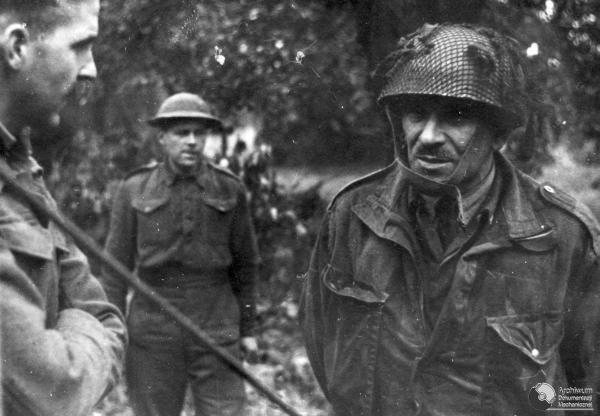 General Stanislaw Franciszek Sosabowsk was the commander of the Polish 1st Independent Parachute Brigade which fought valiantly in Operation Market Garden, a battle which ended with disastrous casualties of allied troops including the Polish division. The Polish 1st Independent Parachute Brigade was among the Allied forces taking part in Operation Market Garden. Due to a shortage of transport aircraft, the brigade was split into several parts before being dropped into the battle. A small part of the brigade with Sosabowski was parachuted near Driel, Holland on 19 September, but the rest of the brigade arrived only on 21 September at the distant town of Grave, falling directly on the waiting guns of the Germans camped in the area. The brigade’s artillery was dropped with the British 1st Airborne Division, commanded by Major-General Roy Urquhart, while the howitzers were to arrive by sea, which prevented the brigade from being deployed effectively. Three times Sosabowski attempted to cross the Rhine to come the assistance of the surrounded 1st Airborne Division. Unfortunately, the ferry they hoped to use had been sunk and the Poles attempted the river crossing in small rubber boats under heavy fire. Even so, at least 200 men made it across the river and reinforced the embattled British paratroopers.

Despite the difficult situation, at a staff meeting on 24 September, Sosabowski suggested that the battle could still be won. He proposed that the combined forces of XXX Corps, under Lieutenant-General Brian Horrocks, and the 1st Polish Parachute Brigade should start an all-out assault on the German positions and try to break through the Rhine. This plan was not accepted, and during the last phase of the battle, on 25 and 26 September, Sosabowski led his men southwards, shielding the retreat of the remnants of the 1st Airborne Division. Casualties among the Polish units were high, approaching 40%, and were at least in part, the result of Lieutenant-General Browning’s decision to drop the paratroops just 7 kilometres from the bridge at Arnhem.

The table below shows the fate of the 11,920 men who took part in the airborne operation as part of the British and Polish forces.

After the battle, on 5 October 1944, Sosabowski received a letter from Field Marshal Bernard Montgomery, commander of the Anglo-Canadian 21st Army Group, describing the Polish soldiers as having fought bravely and offering awards to ten of his soldiers. However, on 14 October 1944, Montgomery wrote another letter, this time to the British commanders, in which he scapegoated Sosabowski for the failure of Market Garden. Sosabowski was accused of criticising Montgomery, and the Polish General Staff was forced to remove him as the commanding officer of his brigade on 27 December 1944.

He was portrayed by Gene Hackman in the 1977 war film A Bridge Too Far. Besides the quote “When one man says to another, “I know what let’s do today, let’s play the war game.”… everybody dies.”, there is another  scene that shows quite nicely what kind of character Gene Hackman was trying to bring across: Later in 1957 he said the following at the Committee of Polish Parachutists: “When jumping with a parachute, everyone is afraid. Do not believe those who say that they were not afraid. It is not true, and it would be unnatural.”

If you want to read more about the life of Stanislaw Sosabowski, I suggest you take a look at this fantastic article on the Polish Greatness blog. Get your own copy of Sosabowski in our shop and via our resellers.

*Originally published on March 12 2017. Updated with pictures of released miniature*