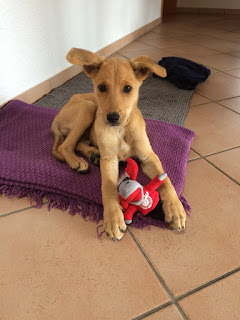 While I am keeping this blog focused on the miniature painting & tabletop wargaming hobby, I have a little bit of a different post this time around.

I went silent for about 6 months and while this was due to work and holiday travel in the beginning, another event impacted my life and is now part of the same. Sounds dramatic, doesn’t it?

So here is what this is all about: My wife and I spent our holidays in Crete at the end of August until the beginning of September. During our stay there, or rather at the very end of our stay, we found a puppy which was apparently let go by its owner. The little guy was all by himself on a scorching hot day and after some consideration and discussions with my wife, we decided to take him home with us. We named him Nero by the way. And yes, I realize that he is not black.

Let me share a few pictures with you that document nicely how the little guy has become a well-sized dog. When we found him he was about 10 weeks old and by now he is a bit older than 6 months… so still some time left for growing bigger and stronger. 🙂 10 weeks. Notice the transformation of the ears over the series of pictures. As long as you have treats for me I will walk by your side. Could you ever be angry with him? Yes, actually you could… First time home alone for 30mins. OK. Pointy ears. Period.
…and I own this place now in case you are wondering.
So there you have it. The reason why my brushes stayed dry.
I have actually started painting now again and I’ve completed another small unit of Germans for Bolt Action.
Aaaaand, I am working on completing the paint job for a miniature that I had made and which will be cast in a small series.
Pics to follow soon!
Comment (1)
dog things that keep us from the hobby

One Reply to “The reason for going silent for so long”