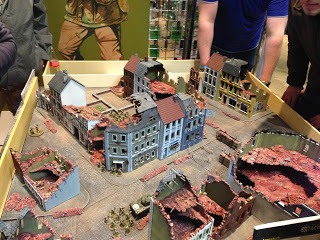 Last weekend, a few buddies and I spent a fantastic weekend in Hamburg. We didn’t actually see anything of the city itself, but that was ok as our visit to this northern perl of Germany was completely motivated by wargaming: Tactica is an event that draws a big wargaming and miniature lovers crowd and it took place for the 11th year in a row this time.
As usual, the quality of the prepared battlefields was stunning and you could play lots of different time periods and gaming systems. On top of that, there is always good representation of different vendors to make sure that you don’t leave Tactica with a big hole in your pocket.
There was also something new this year: A series of different painting workshops / demonstrations in a separate (and pretty quiet) room by the Pigment Pirates Hamburg. If I am not mistaken, there were even some airbrush demonstrations by folks from Haarder & Steenbeck directly.
I was very happy to see how crowded the room was for every workshop and I am hoping that we’ll see this being continued for future Tactica events.
Good job, Pigment Pirates!!
So let’s look at the picture impressions that I was able to make: Bolt Action – The Battle for Aachen – Absolutely stunning board. I talked to the guys who built this and your jaw might drop knowing that every single building on this board is scratch built. Oh, and the board was done from start to finish in 6 weeks. *gasp* The board right next to it (and directly at the Warlord Games booth) was equally beautiful. It was created by the guys from Tabletop Basement. Check out their Tutorials section which points to their Youtube channel where they explain parts of the building process quite nicely and in a lot of detail (German language). Wild West board with a prepared scenario from Lucky Luke! One of the demo boards from Freebooter’s Fate. Christoph Blumental from the Pigment Pirates giving a painting demo Definitely nice to look at… not sure I’d want to have to play one of these armies though as it must take hours to even complete one game turn. I’ve stumbled across a couple other blogs where people have shared their pictures, so let me share those with you as well:
(both in German, but with lots of pics)
http://thrifles.blogspot.de/
http://derkleinekrieger.blogspot.de/2016/03/tactica-2016-die-spielplatten.html?spref=fb