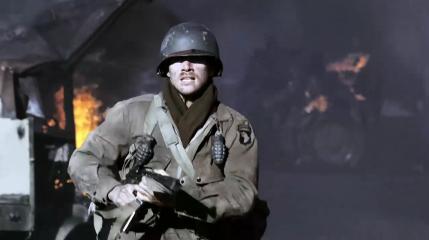 Speirs joined the Paratroopers and was assigned to Baker Company, 1st Battalion, 506th PIR, 101st Airborne, at Camp Toccoa. He was later transferred to Dog Company, 2nd Battalion, and made 1st Lieutenant. After training, he headed to England to await their next mission. At Aldbourne, he married a British widow and together they had a son named Robert.

Speirs, his unit and Easy Company eventually dropped into Normandy on 6 June 1944. On D-Day morning, it was said he gave cigarettes to Nazi POWs and immediately shot them with his submachine gun. Malarkey (according to the series) was nearby when it happened. Speirs then helped in the Brecourt Manor Assault, where he took 5 Dog Company Soldiers and a Fox Company Soldier and single-handedly took out a 105mm Howitzer. He took part in the battle of Carentan and was moved to hold the line at a field outside the town. It was here he encountered Private Albert Blithe and told him that the reason Blithe hid in a ditch and didn’t fight was that he still believed there was hope but he must lose hope to truly function as a soldier. When the Germans assaulted their position the next morning, he and his company retreated due to suffering a severe tank assault. Easy company held the position and he and his men returned to the position.

During the Normandy Campaign, Speirs was wounded by a German M24 grenade (called a ‘Potato Masher’) in the face and knee. He recovered and returned to Dog Company. He then jumped into Holland on 17 September. During Operation Market Garden, he swam across the Neder river with vital information, in spite of being wounded in the buttocks by a machine gun, which was still firing at him. He won a Silver Star for his actions.

Speirs was then sent to Belgium on 17 December to fight at the Battle of Bulge (Bastogne). He encountered Perconte, Christenson and a new paratrooper. He offered them cigarettes but they refused due to the rumour of what he did to the German POWs. He advised them to better fortify their position but they said 1st Lt Dyke already said they were suitably fortified. During the attack on Foy, Easy Company’s CO Lt. Norman Dyke encountered shell shock, so Captain Richard Winters relieved Dike and made Speirs Company Commander. Thanks to him, they were able to take the town of Foy. Speirs did remarkable things, including running across a road in the German-infested town to hook up with Item company, and then returned despite it being suicidal to do so. Check out the scene in this Youtube video: https://www.youtube.com/watch?v=R6da9U6Xjd8

Watch the full 8mins. – it’s worth it until the end.

Check out our version of Ronald Speirs: Lt. Ronald Speirs is now available in our shop and via our resellers.