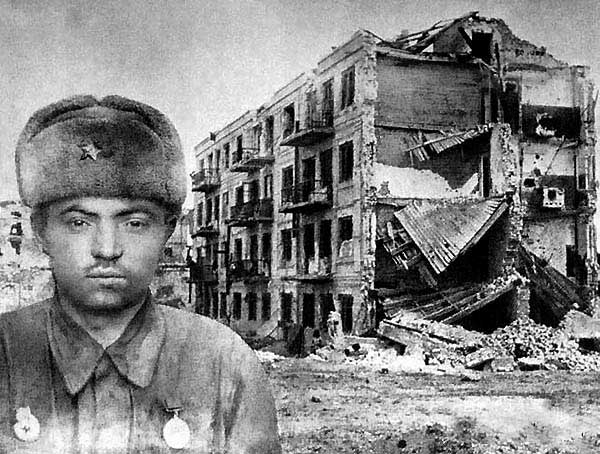 Yakov Fedotovich Pavlov was a Soviet Red Army soldier who became a Hero of the Soviet Union for his role in defending “Pavlov’s House” during the Battle of Stalingrad. On September 27, 1942, Pavlov’s platoon recaptured a four-story building, seized by the German Army and defended it against continual attack by the Germans until relieved by advancing Soviet forces. Jacob Pavlov’s troops held the position for an unbelievable fifty-nine days.

The Germans tried really hard to take the building from Yakov Pavlov and his men, but they were well prepared: In the early stages of the defense, Pavlov discovered that a PTRS-41 anti-tank rifle he had mounted on the roof was particularly effective when used to ambush unsuspecting German tanks; once the tanks had approached to within 25 meters of the building, their thin turret-roof armor became exposed to AT rifle fire from above, but they were unable to elevate their weapons enough to retaliate. Pavlov had reportedly destroyed nearly a dozen tanks personally using this tactic. The building and its defense went down in history as “Pavlov’s House”. For his actions in Stalingrad, he was awarded the Hero of the Soviet Union, the Order of Lenin, the Order of the October Revolution, two Orders of the Red Star and numerous other medals.

Probably the greatest testament to Pavlov’s defense is this – when the Russians captured the Sixth Army, they noticed that German commander General Friedrich von Paulus’ personal map of the battlefield had the structure circled in red and with the hand-written word “Castle” next to it.

The Russians maps had simply labeled it “Pavlov’s House.”

Read more about it here: Yakov is one of two miniatures that we are creating for Huzzah Con in the US and their Battle of Stalingrad theme for 2017.

If you missed the announcement of the first miniature, Friedrich Winkler, take a look here: http://stoessisheroes.com/meet-the-heroes-german-hauptmann-friedrich-konrad-winkler

Both models, Yakov Pavlov and Friedrich, will be first launched at the event and will become available afterwards in our online store and at our resellers.

In the meantime, join the Stoessi’s Heroes group on Facebook and possibly also our Facebook page, so that you don’t miss any announcements for new releases. Also don’t forget to check out Huzzah Con’s Facebook page.