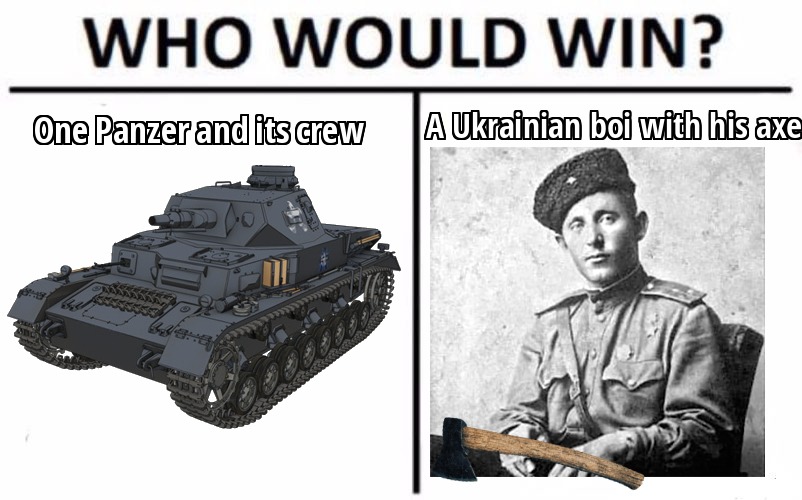 In August 1941, Ivan Pavlovich was in a camp outside the city of Dvinsk (now Daugavpils in Latvia). It was evening, and the soldiers were out on maneuvers, leaving him alone in his field kitchen preparing dinner. A tank rolled up. Sereda stared at it, wondering how many more men he would need to feed. Then he realized the tank was not Soviet-made. It was German.

Ivan Pavlovich hid behind the kitchen tent. The tank stopped in the clearing, and four soldiers got out talking in German. He grabbed his rifle and an ax he used for cutting firewood. Then he charged, screaming like a maniac.

The Germans, thinking they were outnumbered, climbed back into their tank with the Soviet cook hot on their heels. They shut the hatch and seconds later opened fire with their machine gun, but Sereda was on the tank. With his ax, he hacked away at the gun barrel, pummeling until it bent.

The German troops revved up the tank to escape, but Sereda stuffed the peepholes so the Germans could not see out.

He continued hammering on the tank with his ax while yelling at his comrades to bring their tank grenades. There were no comrades around but not knowing that the Germans surrendered.

Sereda ordered them out one by one. As each soldier appeared he ordered them to tie each other up. On their return, Sereda’s superiors were impressed with his actions, and they made him a scout.

Weeks later, the former cook came across a German tank chasing a group of Soviet soldiers. When they stopped to reconnoiter, Sereda snuck up to the tank and threw a grenade into it, killing the crew. Before the rest could react, he climbed into the tank and fired – killing about a dozen Germans and forcing the rest to surrender.

He was then made a platoon commander of the 4th Infantry Regiment, 46thInfantry Division of the 1st Shock Army. He fought in the Siege of Leningrad from October 10 to November 23.

Check out our version of this crazy battlefield cook

Ivan is now available in our shop and via our resellers.