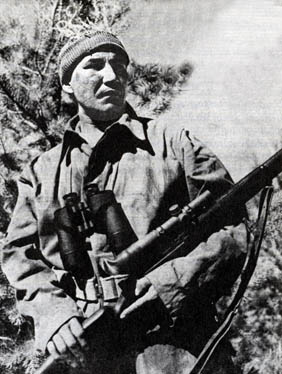 Tommy Prince was Canada’s most-decorated Aboriginal war veteran, having been awarded a total of 9 medals in WW2. He would sneak into the enemy camp, and he would steal the German`s shoes. Other times he would go into a German camp at night and slit the throat of every third German soldier when they were sleeping.

One can only begin to imagine the impact on German morale! Tommy Prince was part of a special unit, the Devil’s Brigade…

With their faces smeared with boot polish these are the men who made up one of the deadliest commando units of the Second World War.

They are all members of the 1st Special Service Force – an elite unit made up of American and Canadian soldiers who captured 27,000 enemy prisoners between 1942 and 1944.

The legendary special force was tasked with creating havoc behind enemy lines through sabotage and slaughter and laid the foundation for the U.S. navy SEALS and the modern day special forces in Canada.

The troop were so feared by the Nazis that they earned the nickname the ‘Devil’s Brigade’ because of their painted faces and stealth tactics.

The Devil’s Brigade was formed in 1942 and the 1,800 strong force was primarily made up of volunteers who were previously lumberjacks, forest rangers, hunters or game wardens.

They received  intensive training in stealth tactics, hand-to-hand combat and the use of explosives for demolition. They even had a specially designed fighting knife made for them called the V-42. After each successful raid they left a card depicting their unit patch and the phrase ‘Das dicke Ende kommt noch’ or ‘The worst is yet to come. So, back to Tommy Prince:

Prince enlisted in the Canadian Army on 3 June 1940 and was assigned to the 1st Field Park Company of the Royal Canadian Engineers. By 1942 Prince was a sergeant with the Canadian Parachute Battalion. Posted to the 1st Canadian Special Service Battalion, he was among a select group of Canadian soldiers sent to train with an American unit to form a specialized assault team. They became the 1st Special Service Force (1st SSF), known to the enemy as the “Devil’s Brigade.” Prince distinguished himself with the 1st SSF in Italy and France, using the skills he’d learned growing up on the reserve. He displayed his covert abilities in a celebrated action near the front line in Anzio, Italy. In February 1944, he volunteered to run a communication line 1,400 meters out to an abandoned farmhouse that sat just 200 meters from a German artillery position. He set up an observation post in the farmhouse and for three days reported on German movements via a communication wire.

When the wire was severed during shelling, he disguised himself as a peasant farmer and pretended to work the land around the farmhouse. He stooped to tie his shoes and fixed the wire while German soldiers watched, oblivious to his true identity. At one point, he shook his fist at the Germans, and then at the Allies, pretending to be disgusted with both. His actions resulted in the destruction of four German tanks that had been firing on Allied troops.

In France in the summer of 1944, Prince endured a grueling trek across rugged terrain to locate an enemy camp. He traveled without food or water for 72 hours. He returned to the Allied position and led his brigade to the German encampment, resulting in the capture of more than 1,000 German soldiers.

Stoessi’s Heroes is proud to announce a miniature to commemorate this great man: