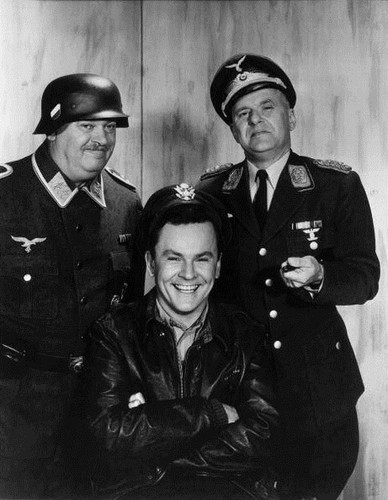 Check out our hommage to Hogan’s Heroes. 🙂 For those of you who haven’t heard of Hogan’s Heroes before, I recommend to take a couple of minutes and to check it out on Youtube. I haven’t watched them all I have to admit, but I did watch most of Season 1 (in black and white) and some of the episodes are absolutely hilarious! 🙂

If you don’t have time for Youtube right now, here is the Executive Summary: Oberst Wilhelm Klink is the Kommandant of a prisoner camp called Stalag 13 and he loves to point out on a regular basis that no prisoner has ever escaped from Stalag 13.
Oberfeldwebel Schultz is the camp’s Sergeant of the Guard and he has a solid philosophy that helps him to avoid being transfered to the Russian front: “I know nothing. I see nothing. I hear nothing.”

Colonel Robert E. Hogan, senior ranking POW officer in a prison camp called Stalag 13. He often likes to refer to himself as “Hoganmüller”, “Hoganschmidt”, “Hoganheimer” or “Hoganburg”
and he runs a secret anti-Nazi organization inside the prison camp specialized in sabotage, spying and rescuing Allied airmen & sending them back to England.

All of them are now available in our shop and via our resellers.