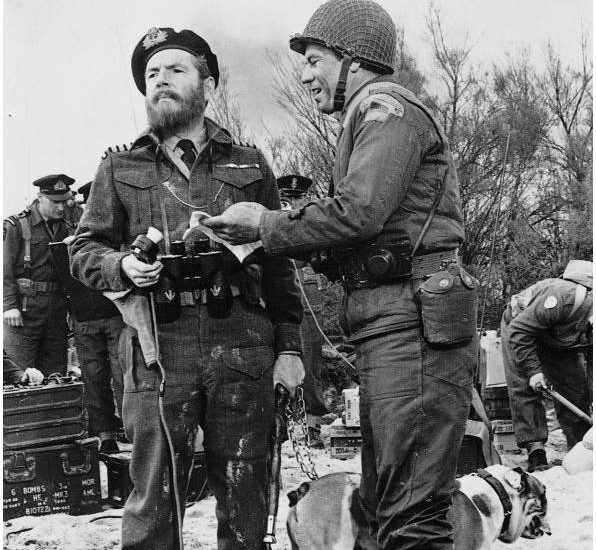 Captain Colin Douglas Maud DSO & Bar, DSC & Bar (21 January 1903 – 1980) was a Royal Navy officer who during the Second World War commanded the destroyers Somali and Icarus and acted as beach master of Juno beach at the D-day landings. With a heavy black beard, he “possessed the outward appearance of a latter-day buccaneer and was endowed with exceptional boldness and tenacity to go with it”. His blackthorn stick and dog Winnie provided an image when portrayed by Kenneth More in the film The Longest Day. He was described as “one of the most popular officers in the British Navy”.

In the 1962 movie The Longest Day he was played by Kenneth More (who also served as a British naval officer in the Second World War). Winnie, his dog, was a German Shepherd, and Werner Pluskat already had a dog of the same breed in the film but Darryl F. Zanuck “improved upon history” by making Winnie an English Bulldog. Maud acted as a technical adviser on the film and provided More with the same shillelagh he had carried on D-Day.

Check out this video on Youtube whith Kenneth More as Colin Maud in the movie “The Longest Day”: https://youtu.be/rL9-Va6_SVY?t=73

So, here he is: Stoessi’s Heroes’ version of Colin Maud: Colin and his bulldog are now available in our shop and via our resellers.