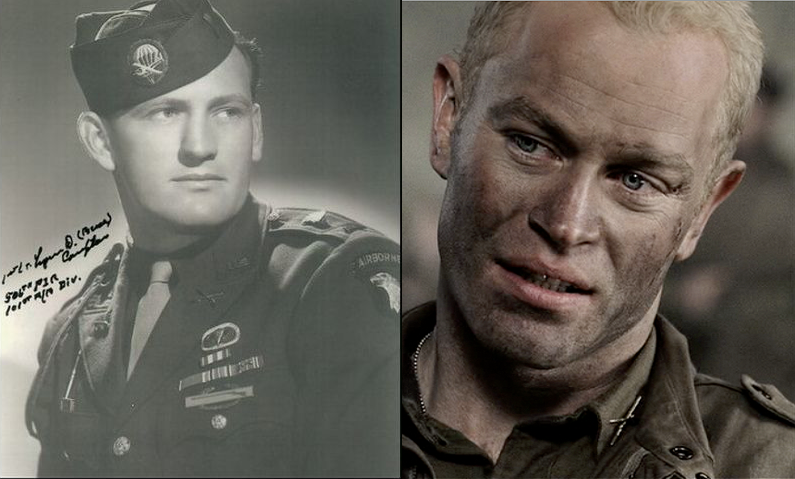 In December 1943, Lynn Compton joined the Army and was assigned to E Company, 2nd Battalion, 506th Parachute Infantry Regiment in the 101st Airborne Division prior to Operation Overlord. During the company’s action at Brécourt Manor, Compton and others, under the leadership of Lieutenant Richard Winters, assaulted a German battery of four 105 mm howitzers firing on Utah Beach, disabling the guns and routing the enemy. Compton was awarded the Silver Star for his action in disabling the guns. Episode two (“Day of Days”) of the HBO miniseries Band of Brothers depicts this assault. During the battle, he threw a grenade, that was said to have no arc, and hit the German soldier on the back of the helmet. Later in 1944, Compton was shot through the buttocks while participating in Operation Market Garden, the Allies’ ill-fated attempt to seize a number of bridges in the Netherlands and cross the Rhine River into Germany. The bullet traveled sideways, through one side of the buttocks and out the other side. After a partial recovery, he returned to Easy Company in time for the siege in the frozen Ardennes that became known as the Battle of the Bulge. In January 1945, Compton left Easy Company for another assignment. According to Band of Brothers, though ostensibly evacuated for severe trench foot, his transfer was due in part to combat fatigue, culminating when Compton witnessed two of his closest friends, Joe Toye and William Guarnere, being badly maimed by artillery fire resulting in each losing a leg. Compton wrote in his autobiography, “…although I was affected by the horrors of Bastogne, I do not believe I was clinically shell shocked, as the series portrays me. In real life, while I was hollering for the medic, trying to figure out what to do, I remember two distinct thoughts: How are we going to help the wounded guys?…Maybe this is the time the Germans are really going to get us all.”

In 1947 he joined the Air Force Reserve, serving in the Office of Special Investigations and eventually Judge Advocate General Corps before retiring as a lieutenant colonel in 1970. Check out our version of Lynn Compton: Lynn Compton is now available in our shop and via our resellers.