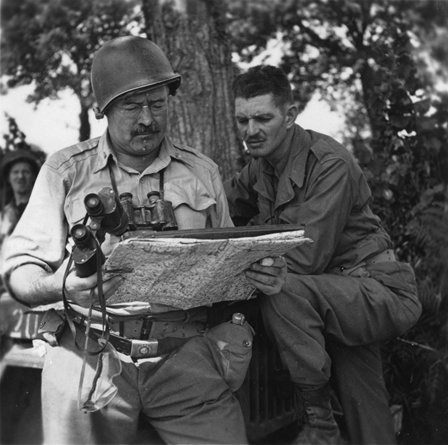 Ernest Hemingway was in Europe from May 1944 to March 1945. He had come to the front to show the “Great American Public” how the war should really be reported. He would show them what war was really like—brutal, unsentimental, red-blooded macho. And his chosen vehicle for this reporting was the unsuspecting 22nd Regiment of the 4th Infantry Division, nicknamed the Ivy Leaguers. He would have plenty of material with which to work. Before the war was over, the Ivy League division would be decimated almost three times, suffering approximately 30,000 casualties. From May 1944 to March 1945, Hemingway was in London and Europe. When Hemingway first arrived in London, he met Time magazine correspondent Mary Welsh, with whom he became infatuated. Martha had been forced to cross the Atlantic in a ship filled with explosives because he refused to help her get a press pass on a plane, and she arrived in London to find Hemingway hospitalized with a concussion from a car accident. Unsympathetic to his plight, she accused him of being a bully and told him that she was “through, absolutely finished”. The last time that Hemingway saw Martha was in March 1945 as he was preparing to return to Cuba, and their divorce was finalized later that same year. Meanwhile, he had asked Mary Welsh to marry him on their third meeting.

Hemingway was present at the Normandy Landings wearing a large head bandage but, according to Meyers, he was considered “precious cargo” and not allowed ashore. The landing craft came within sight of Omaha Beach before coming under enemy fire and turning back. He later wrote in Collier’s that he could see “the first, second, third, fourth and fifth waves of landing troops lay where they had fallen, looking like so many heavily laden bundles on the flat pebbly stretch between the sea and first cover”. Mellow explains that, on that first day, none of the correspondents were allowed to land and Hemingway was returned to the Dorothea Dix. Late in July, he attached himself to “the 22nd Infantry Regiment commanded by Col. Charles ‘Buck’ Lanham, as it drove toward Paris”, and Hemingway became de facto leader to a small band of village militia in Rambouillet outside of Paris. Of Hemingway’s exploits, Paul Fussell historian and critic of the literature of the two world wars, remarks: “Hemingway got into considerable trouble playing infantry captain to a group of Resistance people that he gathered because a correspondent is not supposed to lead troops, even if he does it well.” This was in fact in contravention of the Geneva Convention, and Hemingway was brought up on formal charges; he said that he “beat the rap” by claiming that he only offered advice.

On August 25, he was present at the liberation of Paris although, contrary to the Hemingway legend, he was not the first into the city, nor did he liberate the Ritz. In Paris, he visited Sylvia Beach and Pablo Picasso with Mary Welsh, who joined him there; in a spirit of happiness, he forgave Gertrude Stein. Later that year, he was present at heavy fighting in the Battle of Hürtgen Forest. On December 17, 1944, a feverish and ill Hemingway had himself driven to Luxembourg to cover what was later called The Battle of the Bulge. As soon as he arrived, however, Lanham handed him to the doctors, who hospitalized him with pneumonia; by the time that he recovered a week later, most of the fighting in this battle was over. In 1947, Hemingway was awarded a Bronze Star for his bravery during World War II. He was recognized for his valor, having been “under fire in combat areas in order to obtain an accurate picture of conditions”, with the commendation that “through his talent of expression, Mr. Hemingway enabled readers to obtain a vivid picture of the difficulties and triumphs of the front-line soldier and his organization in combat”.

Check out our version of Ernest Hemingway: Ernest Hemingway is now available in our shop and via our resellers.