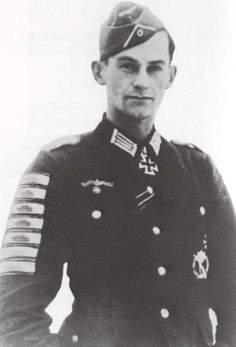 There are those stories of WW2 that everyone knows and which have become famous and well-known through books, movies or TV-Series. But then there are other individuals from WW2 where not much is known besides their impressive achievements. We can only speculate about their personal stories and what kind of people they were. Günther Viezenz is one of them:

Günther Viezenz was a Hauptmann (Captain) of 10th Company, Grenadier-Regiment 7 of the 252nd Infantry-Division. No German soldier was awarded more Tank Destruction Badges than him: he single-handedly destroyed  21 enemy tanks with close combat weapons such as grenades, panzerfaust, t-mines or hollow charges. This was the highest number of enemy tanks destroyed single-handedly by an individual. He was awarded the “Tank destruction Badge” in Gold (4x) and in Silver (1x). This award was not given to anti tank units.

We really wanted to capture him in a pose where he is about to sneak up on an enemy tank so he can finish it off with his Panzerfaust: Günther Viezenz is now  available in our shop and via our resellers.